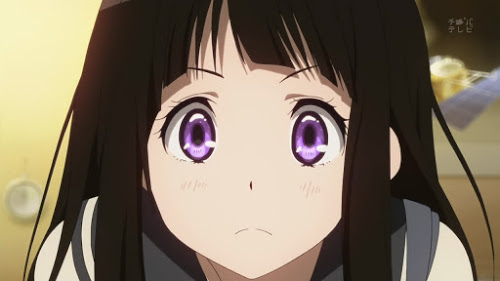 We’re a sports anime podcast, but that doesn’t stop us from writing about other anime. I try to keep everything as sports anime-y as possible, but there’s an upcoming end of year discussion which will include movies and what I’d like to be a yearly Anime Secret Santa post, curated by the Reverse Thieves.

This year, I’m checking out Hyouka as it was the only one that looked remotely good (the other options were Girls und Panzer and White Album 2). I’m happy to report that I wasn’t disappointed. My co-host may have other words, but I’ll leave that to him.

I was always excited to see Hyouka. When it first started airing in 2012 I had just gone legit and bought a Crunchyroll subscription, so I was disappointed when it wasn’t (and still isn’t) streaming anywhere. I told myself that I’d wait. Someone eventually is going to license Hyouka for sure! Well, here we are nearly five years later and still no license. Oh well, crappy fansubs will suffice I guess, but I always hate resorting to them. They’re just…not good. I also prefer only to turn to fansubs when the show is never going to get touched by a licensor, in the US or otherwise. Stuff like Touch and Aim for the Ace. I suppose the Touch movies or even the whole first series of Aim for the Ace from Discotek, but I won’t hold my breath. I have realistic expectations. But I digress.

Hyouka is about a group of folks that sit around in their club room shooting the shit (this time without tea). One Houtarou is a pretty great detective, Eru Chitanda is very curious, Satoshi Fukube is a self-proclaimed database, and Mayaka Ibara is seemingly a jack-of-all-trades but master of none. The show itself is based off a novel series by Honobu Yonezawa and feels incomplete upon finishing the run of 22 episodes, plus the OAV episode that I could have done without. I thought this was a standalone novel but I look it up and lo and behold it’s the first in a series of four. That explains everything!

Except its plotting. There are a series of mysteries that I can only equate, in book form, to chapters. But some of these mysteries last several episodes and I could only conclude that the book is split into something like five chapters over the course of an entire book. That seems like a small number of chapters, but what do I know. I only read manga. It splits up to about 40 or so pages per chapter, so I guess that’s not too long. It still feels weird to have these seemingly disjointed stories strewn together all in one book. The one connecting point between them all is the main characters, not a narrative. As we move further into the series, we’re introduced to a slew of other characters that knew someone, usually Chitanda, that bring up new mysteries because of the circumstances that surround them.

Constantly, I wondered how it all connected. In the end, it didn’t. It was just a series of mysteries. Now, there’s nothing wrong with that. I love me some Case Closed, but those are intentionally one shot. Plus, he lives at a private detective’s house, he’s bound to run into cases. These kids are not, but they constantly find themselves surrounded by them. I mean, I’m never really dissatisfied with how they’re set up or how they turn out, because it’s not like anyone is killing anyone else, but I’d like a little more connection between them.

Character is paramount on stories though, so how do the four measure up? Not well in my estimation. The only character with anything resembling growth is Oreki, who’s subtle about everything but solving mysteries. Through Chitanda, he seems to have grown to care about…well everything a lot more. He’s a self-proclaimed energy conserver that won’t do anything if he doesn’t have to. But since he met Chitanda, he clearly wants to do things for her, to sate her curiosity. For being a pretty good detective, he sure can’t deduce his own love. Or he does and vehemently denies it.

Chitanda remains curious throughout. Satoshi seems to have changed from junior high to high school, but we never see that change for ourselves so it doesn’t count. Ibara falls to the wayside all too often and sometimes feels like she’s there just to fill the role in the group of whatever the situation calls for. Her aunt owns an inn that’s under construction, so they can go on vacation there! She knows how to cook an alright meal with flour and scraps! Her biggest character trait is that she likes Satoshi which is 1. very sad and 2. not touched on nearly enough to be satisfying.

I can’t say I disliked Hyouka. I’m a sucker for mystery stories though and I’d probably love it just as much if it was worse; I liked Un-Go after all. I can say this: The mysteries were always compelling. I loved to see them play out and be solved by Oreki. It sated the Case Closed fan in me and for that I’ll always be grateful.