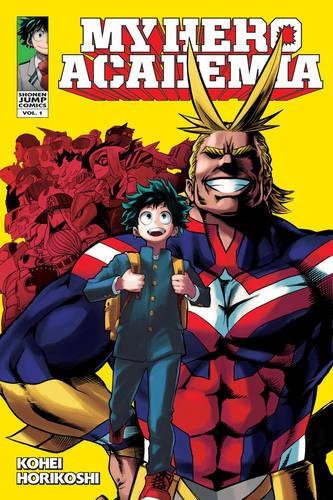 I just watched the White Sox give up three runs on two wild pitches and a walk, but Korea still beat Germany in the group stage of the World Cup and that can never be taken away from me.

This episode, Patz and I are talking about Kohei Horikoshi’s My Hero Academia published by Viz Media. Unlike usual episodes, Patz and I just dug into everything up to the school festival stuff, so spoilers abound. Listen at your own risk if you aren’t caught up!

As always, you can find me on Twitter @ImpassionateK, and my co-hosts Helen (@WanderinDreamr) and Apryll (@manjiorin) on Twitter at those places in the parenthesis. You can find both of their writing at The Organization of Anti-Social Geniuses, more of Helen’s writing at Narrative Investigations, and my writing at the Fandom Post. And you can find Patz on Twitter @PatzPrime as well as on The Cockpit podcast.

It’s just Patz and I talking My Hero Academia. No show notes this time!

Next time is still Helen, Apryll, and I talking about Girl Friends and My Bride Was a Boy.