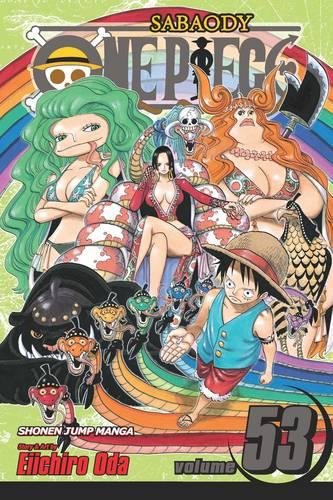 Forgot to write a whole thing until I was already done, so just here to say the Bears squeaked by in a game they should have lost and the White Sox season means NOTHING. Also looking forward to following the Clippers for the first time ever.

This episode, we get closer and closer to the New World, first finishing off Thriller Bark, then arriving on the Sabaody Archipelago, and finally landing on Amazon Lily.

That song you heard at the start of the episode was “Share the World” by TVXQ from the One Piece anime.

You can find Patz on Twitter @PatzPrime and hear him talking about robots @CockpitPod, and you can find Grant on Twitter @grantthethief and hear Grant talk about various things at Blade Licking Thieves and The Super Sentai Podcast.

I say we talk about Thriller Bark to Amazon Lily, but we do delve some into Paramount War and New World, but none of it is spoiler-y. If you’re especially averse and haven’t read yet though, just be warned.

0:48 – We start the show and talk about Thriller Bark!

11:10 – We talk about Sabaody! Which is apparently pronounced sha-bon-di.

Next time is Legal Drug and O Maidens in Your Savage Season!