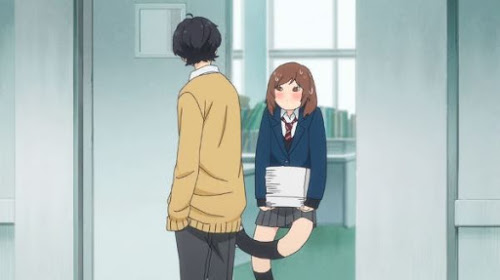 There was a literal metric crap ton of good anime in 2014. Like, holy cow. 10 on this list hardly does it justice. There were several sports series that deserve a look, and I hope to cover all of them on the podcast at some point in the future. Baby Steps was a charming tennis show about a guy who thinks too much and it works out for him, Haikyu is a wonderful series that I wrote up on the tumblr (and also at the Fandom Post in two halves), Kuroko’s Basketball is one that we’re going to be covering once it finishes, Yowapeda is one that we’re going to finish covering when it finishes (check out the first part here), and there has to be a Free episode sometime in the future.

Then there’s the basically-sports-anime Gundam Build Fighters, the second season of which I’m covering at the Fandom Post.

I covered both One Week Friends and Blue Spring Ride over at the Fandom Post, but they deserve mention again.

Then there’s weird stuff like the strangely commentative World Conquest Zvezda Plot, the “boy as a princess” Witch Craft Works, and the melodramatic but still fantastic Nagi no Asukara. Always stuff to think about in those and I’m sad I can’t talk more about them.

Then there’s the shows I just wanna keep watching and watching because the characters are that lovable. None is more compelling than The Kawai Complex Guide to Manors and Hostel Behavior (Bokura wa Minna Kawai-so in Japanese). But even without Kawai Complex, there’s Inari Kon Kon, a fun little story about shrines, and Tonari no Seki-kun, which will always get a laugh out of me.

And then there’s the second season of Love Live, which simply cannot get enough praise from anyone ever. Truly, the only people who don’t like Love Live are the people who haven’t seen it yet.

Then there’s thought provoking, but didn’t quite make it on the list because the other stuff is just better. Bahamut, which I can’t quite put my hand on why I liked it so much, and The World is Still Beautiful, which captures a love for life, love, and nature altogether better than any show in recent memory, top the list.

Then there’s my final review shows, Nisekoi and Magi, both of which have had enough ink spilled on their respective subjects.

Let’s get right to the good stuff!

Probably nothing surprised me more in 2014 than Tokyo Ghoul. The twists in Samurai Flamenco were surprising, but it proved to come together in the end. But Tokyo Ghoul was a show that I would have easily dropped after episode two if not for praise from elsewhere. It dealt in comparisons between “the human” and “the other,” the ghouls being the other. It’s represented through Kaneki, who becomes a ghoul not of his own accord. He’s the medium between them and it works perfectly to not only show the cruelty of humanity, but of the ghouls.

9. Mushishi: The Next Chapter

It was pretty obvious that Mushishi would be good. The first season from 2005 (almost ten years old!) blew me away overall, and some of the episodes in that are the best I’ve seen. The second season doesn’t disappoint. It only ran for 20 episodes, with two specials, but nearly every episode could be called my favorite from the show. Mushishi isn’t really a show to be marathoned. It’s a show to settle into with a nice glass of something.

Kill la Kill, from the son of studio Gainax aka studio Trigger. The first half has Fight Club Mako, perhaps the character I most want a figure of, and the second season builds and builds and builds until you’re breathing too hard from exciting exertion (and…uh…not the costumes). It’s a story that deserves a lot more of a write up than a paragraph and, if you’ve seen it, I suggest you seek it out. It’s simply wonderful.

It’s so hard to describe why I like Nozaki-kun so much. Wait, no it’s not. Nozaki-kun is one of the funniest and most charming series I’ve watched in a while. It gets exactly at what is most hilarious about shojo tropes and deconstructs—but usually merely pokes fun at—almost all of them. It makes the best boy a girl and the best girl a boy. It ships the main character of a dating sim with his best friend because he was always there by his side. It’s just the greatest thing to watch.

Two sequels on this list, yes, but they were both fantastic. Silver Spoon is from Hiromu Arakawa, the very same that did Fullmetal Alchemist, and it is a huge leave from popular shonen. It’s the kind of show that teaches in the best ways and entertains in the most fun. It’s a series that’s about wanting to spend more and more time with these characters because they’re so darned charming. It’s also a story of discovery. Hachiken is a guy you can get behind and he’s a guy you can empathize with, even if you never went through exactly that. It’s a show I cried through, it’s a show I rooted characters on through, and it’s a show where you learned where eggs come from.

No other series has been this uplifting and this heartbreaking as Space Brothers was in its 99 episode run. What I thought was 13, no more than 26 episodes turned into one of the longest running and best anime I’ve seen not just in 2014, but in my life. Every week, I looked forward to Space Brothers and every week when they were airing on the same day, I watched Space Brothers then Hunter x Hunter because I knew I’d need something like Hunter x Hunter for a Space Brothers chaser. Watching Mutta for 99 episodes grow and learn and love only made me want to watch 99 more.

There was not a show that premiered this year that I wanted to watch more of than Barakamon. From Handa to Naru and everyone in between, the cast of Barakamon was an absolute joy to tune into each week. Not just that, but the journey of Handa, like Hachiken, was something to empathize with. Here is a guy with tremendous talent and he has no idea what to do with it all. He’s reached his peak too soon and hit a wall at the young age of 23. It’s everyone else that warms his, and the audiences, heart.

I watched Hunter x Hunter from October 2, 2011 up until September 23, 2014 and almost never missed an episode. Every week, Hunter x Hunter, and Space Brothers when it was running, were the highlights. I fear me becoming dull with it, like I have with most shonen shows like this. Hunter x Hunter was always ramping up the story, the fun, and the intrigue. Yorknew solidified it as one of my favorite shonen properties, the beginning of Chimera Ant had me on a ledge, and by the end I fully embraced the joy that Hunter x Hunter would always bring to my life.

I have talked so much about Ping Pong, but it deserves it. Tom and I reviewed it at the Fandom Post, we talked about it on this here podcast, and then the Fandom Post named it Anime of the Year for 2014. I don’t really know what else to say. Go watch Ping Pong.